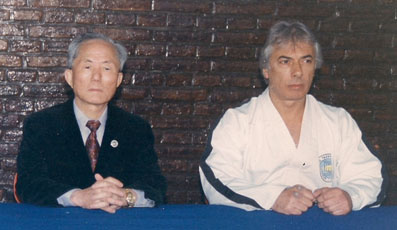 Beyond being something owned by a person, belonging is also the circumstance of being part of a group, such are the meanings described in the dictionary. Sometimes both concepts merge into one.

The art of Taekwon-Do creates belonging to the group with which one practice and also identification with the Instructor who imparts the knowledge. Likewise, over time and with the incorporation of the skills he is acquiring, the student considers that the art belongs to him. In the aforementioned description, both concepts have been merged.

Many practitioners do not consider the belongings referred to above but rather do so through an acronym that is not a style since it describes only an administrative system and which, curiously, is totally atomized. You have to consider that the word belonging takes on value when it responds to a single, defined destination. You cannot belong to a name or an acronym whose identity is diversity, since it varies according to the need or commercial convenience of different people. They are similar in their name but they are not the same.

Usually it is considered that the acronym and the Founder is the same thing. In fact, they once were, and in that case the word belonging had a particular and distinctive connotation. Several things made that distinction: a single institution, a single uniform, a single emblem, a single regulatory methodology and fundamentally a single biomechanics in its movements. The single turn of the belt symbolizes, among other things, what has been said.

Today offers us a different circumstance: there is not a unique institution, a unique uniform, there is not a unique emblem, there is no single regulatory methodology and fundamentally there is no single biomechanics in their movements. Curiously, and if he were alive, the Founder of the discipline would find his achievement of unity obtained with so much effort to be demolished. In different circumstances and on the occasion of translating his words in an interview, he described his art as unique. His techniques and concepts are the same all over the planet, he said. This fact made it different from other martial arts that only had a unique name but their movements varied from one place to another.

In the current institutional potpourri, everyone believes they belong to the Taekwon-Do founded, developed, systematized and disseminated by General Choi Hong Hi simply by mentioning his name and the acronym of the federative system that he presides over. However, this is not the case. As I said in a previous note, the true legacy is in following his pedagogical system, the distinctive biomechanics of the movements and the criteria that always supported the Art of his invention. If you say you belong to the followers of General Choi but your movements do not respect what he taught, you do not belong, no matter how much you put your photo and repeat the philosophical principles as a litany. If you make the sport part your flag, you are walking in another direction than the martial art he founded, even if you keep showing his photo, use the name of his art and repeat the principles again.

In short, to belong you have to invest in the work of which you want to be a part because it is the only way to also own it.

To be awarded read again the previous notes