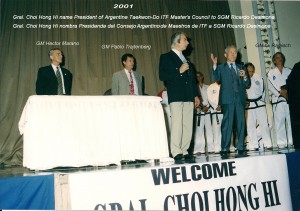 There are several ways to institute a lie, though it is very hard to accept that Taekwon-Do is involved in such a scheme. In June 2015 I wrote  a note about «Taekwon-Do and its offers» which is actual even today.

Those who were involved for years in this activity, can certify how difficult it was in the late 60’s and even in the early 70’s to set up this discipline. Its demographic evolution was obstructed  by other already established martial arts who felt their hegemony in danger by what they considered a minor art.

The pioneer’s perseverance in the teaching field made possible to institute this Art as an efficient self defense method and, later on,  as a sport competition system.

In the early 70’s, Korean political struggles created a division that internationally surprised the students of the activity and eventually used them as hostages in that fight.

Millions of practitioners in the entire world who didn’t know anything about the reasons and details of that division are still involved and strongly defend the institution they belong to. Sometimes the students are in the middle of the unfruitful attacks that both parts constantly fire to each other since 1973 until today.

One part argues for an usurpation feeling in their unquestionable fatherhood of the Art and the other for their paternity in the political conquer to obtain an Olympic status.

The students  demographic increase allowed  this activity to be considered as the sport with the largest growth in the last 20 years.

Those who achieved the Olympic acknowledgement also gained their inclusion in the national sportive budget in their countries,  a fact  that economically supports the people involved in the national delegation (competitors, coaches and authorities).This detail confirms as official the institution with such a condition.

In other words, to be considered official the sport or the art needs the acknowledgement and support of the country involved.

On the other hand and as an undeniable fact: there is an exponential growth of members in the institutions who claim the fatherhood of the Art since its beginning, but without any recognition of the Olympics nor from the sportive authorities of the countries where they are acting. They are being supported only by their followers.

In accordance with this explanation, if you are selected as a competitor for the World Championship of a particular entity, but your plane’s ticket and expenses are not paid by the Country that you’re representing, you’re not in an official institution, just in a private enterprise called federation, association or whatever would be the convenient name used with a commercial purpose only.

This reality allows us to understand the effort of the Taekwon-Do’s Founder, Gral. Choi Hong Hi, who saw his Art growing in spite of the stones that  were set on his path.

There are documents that certify without any doubt what was explained until here.

It has been established in the entire world that Taekwon-Do was born on April 11th, 1955. It’s also true that his Founder created his  International Federation on March 22nd 1966.

But it’s also an undeniable fact  that on June 15th, 2002 (date of its President and Founder’s passing away), that institution begun its atomization and finally concluded in several enterprises that use the same name. All of them and without exception, have modified the legacy, granting themselves the nonexistent mandate for such a thing.

The nowadays  biomechanical development has modifications that very often are against the parameters already established as the axis of the Art. That technical considerations were several times shown by Gral. Choi himself in the International Instructor Courses he offered.

The badges used in the uniforms have curious suggestions that rapidly allow us to identify to which of the enterprises we are talking about. The uniforms were also altered with the same purpose.

The reasons used are various but cannot excuse what was done, only can be explained through the commercial intentions of those who did it.

Like in the preceding years, I was acting as the translator into Spanish in the last seminar actively offered by Gral. Choi Hong Hi (Buenos Aires – November 2001).

As  the President of the Argentine ITF Master’s Council, I was in direct contact with him until he stopped to be in charge of the administration due to his health. In no conversation nor seminar did he mention any of the alterations applied in the biomechanical after his death, and there’s no  document with his signature saying such a thing. Emphatically he asked to the top rank people of those times (8th and 9th degrees) that we had to preserve the patterns (Tul), its characteristic biomechanics and the protocol that identify our Art, in order to  avoid the activity to become just a sportive statement, losing its Martial base and finality.

In consequence,  the fancy modifications done by all and each one of the so called «Technical Committees»,  respond only to a particular convenience of the enterprise that using the same name as the other, need such a trick to differentiate itself from the rest.

The land where Taekwon-Do was born is South Korea, because it was there where Gral. Choi was acting as an Army’s company commander when he developed the Art. He died in North Korea because that is the place where he was born before the already known division,  and where he chose to die. Other interpretations are just political speculations.

Between the unequivocal details that he let established, there is the not dependence to any country or boundaries. That means it does not  belong to  South or North Korea (please read his memories – Book II).

Not in the past nor at this time is there  a controversial hearing in any Court in the whole world with a dispute about who is recognized as the real institution that represents the Taekwon-Do’s teaching system developed by Gral. Choi Hong Hi, its particular technical movements or the administration of its members.

If any of the enterprises called “official” would really have such a recognition, be sure that no other would dare to be called or mentioned in the same way due to its legal implications.

As one other institution, the International Taekwon-Do Organization (ITO) is an international body legally registered in Puerto Rico and USA that teaches the latest version of Taekwon-Do left by Gral Choi, without fancy modifications in its biomechanical and without using the same institutional name as any other.

ITO uses the real legacy of the Taekwon-Do’s Founder:  aptitude and knowledge about his creation. To occupy such a place, it’s necessary to have been in direct contact with him during many years to know that even in his last seminar he once more emphasized on not changing or distorting what was done until that moment.

To summarize:  the only official institution is the one recognized by the Government of the Country involved and who acts as the ruling entity of a particular sport or art, which will cover all the expenses of the sportive delegation of such institution in an international competition.  The other ones are only private enterprises.

If some high shot of any of the enterprises that uses the same name tells you that this is not true, ask him that the particular entity called official where you’re a member pay your air ticket and expenses.

Official or not, everybody has the option to be where they want. I don’t know if this is fair or not, but it’s necessary to know which is the actual institutional status of the Art called Taekwon-Do, which is ruled by several private enterprises that have the same rights to act in such a way and who have their own official activities in their particular private agendas.