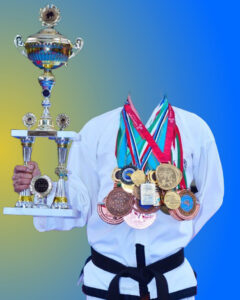 One of the details that were usually pointed out decades ago to differentiate the Taekwon-Do founded and developed by Gen. Choi Hong Hi and the now called Olympic Taekwondo, was the stubbornness of the latter emphasizing that the activity was a sport.

Among other things, this strategy was used to access the Olympics, but once this goal was achieved, they began to cast it as a martial art too.

At that time, all activity of the body called WTF was to organize competitions. In order to feed that destiny, the classes were oriented exclusively to the sporting aspect, ignoring or not paying attention to those who did not have aptitude for that field.

On the other side of the coin called Taekwon-Do was the art devised by Gen. Choi whose classes were oriented to teach the martial discipline as it was conceived by him as its founder. In this martial development was included the sporting aspect but in such conditions that it could be carried out without interfering with the development originally planned. The emphasis placed on the pedagogical system that was disseminated throughout the world equally by the hand of its creator throughout seminars and in its Masters and Instructors authorized in the daily classes, allowed to create a great difference between Taekwon-Do and Taekwondo.

«Let’s play in the woods now the wolf is gone”, reads a phrase from a well-known children’s story.

Faced with the physical disappearance of the General, the pedagogical system designed by him began to blur. That sporting area that was included in the activity’s schema to be utilized by those who had already developed tools to act it pushed to the side the martial aspect to predominate in the new pedagogical system. It was not long before the psychic change and the new way of thinking was more of a sport than martial, to the point that everything that was not related to the competition is looked from the sidelines. The knowledge of the art for self-defense is topics to be dealt with sporadically, more out of obligation than conviction. This new way of proceeding entails a new way of thinking that over look the Do and the physical knowledge necessary for self-defense and with an attitude of total lack of concern. Participating in every tournament is part of the ritual, no matter if it is municipal or national. The medal or trophy has become the target to be achieved.  No one notices that if they name him national champion it is only from the institution that sponsors the event. It cannot be completely national because there are countless institutions that also propose this. As far as the continental, Pan American and world champions, the same thing happens even if it is not said. With the diversity of entities there are the diversity of rules for the competition and when this happens the champion of one organization may not be it in the other, since the regulations that govern the competition may have changed. This shows that the head of the practitioner has a perspective called triumphalism whose only destiny is a prize coined in illusions. In other words, triumphalism has come to life and the martial art is agonizing. Triumphalism brings with it an unequivocal way of thinking and the pursuing of goals. When you win a championship you start dreaming of higher estates. If what has been achieved is national, the next one must be continental and if this is achieved, the one that follows is worldwide. The idea of I THE INVINCIBLE, THE BEST, would begin to be devised for those who were able get to his point.

It is curious, one do not process self-defense like that, since saving one skin is the only triumph sought. For those who think “I THE INVINCIBLE, I THE BEST”, it is necessary to remind them that beyond the great sports champions that undoubtedly exist and have been, especially when there was only one Taekwon-Do, that the best has always been Kronos. There are many that have tried to strip him of its privileged place but have not succeeded. It is undefeated in all categories and in all institutions. It is more; his reign encompasses all races and all fighting systems. If you think it’s not, you just have to challenge him.