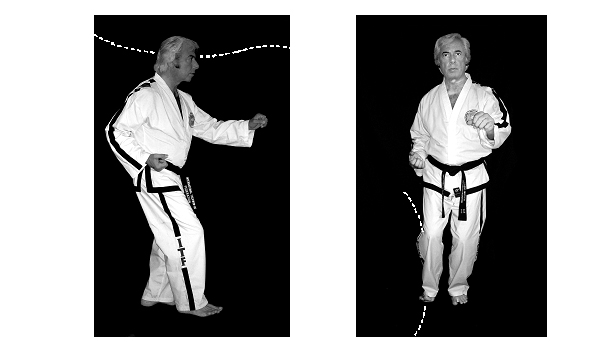 Too much has been said about the different biomechanical used in the many entities that claim to teach Taekwon-Do founded, developed and systematized by Gen. Choi Hong Hi.

Is it a way used by all organizations to establish a particular characteristic to differentiate between each other or simply it is an ignorance of what the founder intended?  I’m prone to think that are both. By first, unknowing the parameters proposed to incorporate the right knowledge, leads to execute the movements with erroneous biomechanics. But take care, because later they exploit these diversities as a particular trademark.

I always repeat a Gral Choi’s saying that paints the circumstance very clearly: «Taekwon-Do is very easy if you know how to do it, otherwise it is very difficult”. This leads me to remember that on one occasion and watching the performing in a patterns’ competition, I remark that this or that movement had been explained several times, however they were being wrongly executed yet. One of the Masters present there (today GM), told me: «don’t worry, that’s better for me, I need it to be so to continue justifying my place». Beyond the unscrupulous of the remark, it contrasts with what was the Founder’s intention, who took great care to teach and explain in detail the composition of the basic in order to reach easily the advanced. He repeated and showed tirelessly with his own body the same technique, because he really wanted those present there to learn. One by one and in details is the right pedagogical method. The human being needs to digest what he is receiving informatively to be able to incorporate it and that requires repetition and detail. If somebody is “teaching” several movements at a time, he wants that you don’t learn any of them in the right way.

If the person does not understand the basics of biomechanics, everything he tries to build afterwards will not only be very difficult but will have poor practical application. Many people are surprised when in a seminar for black belts I explain in detail why it is necessary to understand the basic biomechanics in the execution of four direction punch and four directions blocks (Saju Jirugui/Saju Maki).

In the basics is the advanced I answer.  But of course if you have been instructed that the advanced is very complicated, the explanation will seem unnecessary and you will say that this is for beginners or at least you’ll have that feeling until the illustration is finished.

The explanation is also very simple and easy to incorporate. Remember that the theory is one for all movements (elementary and advanced). But if you are a Black belt of a superior level, you will instinctively reject this because it will compels you to review what you have incorporated. In addition, this will take you to understand that Taekwon-Do uses nature for its purposes and not vice versa. Your body is producing a sine wave all the time you are in motion (walking or running), even if you do not intend to do so and are not practicing Taekwon-Do.

Now, if due bad information you think you should force it implementation, you are telling nature what she already knows it should do when you are in motion.  I guess that you heard General Choi on many occasions (in person if you were in any of his seminars or in movies and in his bibliography if you are from this era) saying: «both arms and both legs should be properly bent while the movement is in motion». When you watch the filming of a crowd that moves (on a busy street or running in a marathon), you will see that although they are not in a Taekwon-Do’s training, they are clearly producing a sine wave when moving. The human body has several joints in the inferior extremities and the natural use of these produces that type of wave when in motion.

That is why every time you fully extend the supporting leg when moving, the sine wave disappears and the saw tooth wave emerge. The latter not only prevents generating maximum power but among other things, risks at the extreme the knees joint. Conclusion, if this basic explanation is not understood and fundamentally executed with your body, your Taekwon-Do is very difficult.  If it is properly incorporated, not only is your Taekwon-Do very simple but it is more powerful and easier to execute, it is more, all the advanced movements will be at your reach as you progress through the next promotions.

to be aware read the previous notes