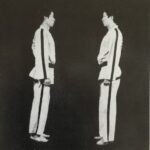 When confrontation is unavoidable, the effectiveness of self defense largely depends on not thinking about our actions. This means that we must act on the basis of reflex action. Reflexes will be activated based on a given stimulus. The stimulus is sometimes the movement that an opponent produces. But it can also be the attitude of the opponent that signals possible aggression. Of course, for our reflexes to be able to respond to the stimulus described, a considerable number of mechanisms must have been incorporated that allow us to act defensively or anticipate the offensive action.
In both cases we will have to have tirelessly repeat each and every one of the mechanisms that will allow us to act in this regard. We will find the greatest collection of such techniques or movements in the patterns or Tul. Different exercises of pre-established sparring will let us train and improve those mechanisms with an opponent or opponents, in such a way that we can adjust the use of time and distance from them. As I said, the exercises will be pre-established because repetition is the only possible method for such movements or techniques to be incorporated and over time count among our reflexes. The process is not fast but it is unavoidable.
Now, if our instinctive movements depend on tireless repetition for their effectiveness, we must be careful about the quality of the movement or biomechanics that we are going to repeat. In the case of Taekwon-Do, founded and systematized by General Choi Hong Hi, each technique has a single destination and is biomechanically supported by the laws of physics and the kinetic energy to produce maximum power. With repetition, time, and perseverance, we will be able to incorporate as a reflex action an interesting variety of mechanisms that we can use for self defense. All of the above requires us to be careful with each technique and its biomechanics that we incorporate based on repetition and perseverance. Therefore, the information that we obtain for such an important achievement must be accurate and proven.

The logical way for the information to meet such requirements is that it comes from whoever has the theoretical / practical knowledge to do so. If the information is only theoretical it is useless because it has no verification, which invalidates the information received on many occasions by those who have never set in motion such advice, but have only read about it. If it is only practical, it have a different and better value, but we do not have the security of compliance with the biomechanical parameters that will ensure the generation of maximum power and efficiency. It is necessary to develop the maximum power that our body can generate because it is impossible to know the size of a future adversary or adversaries. Finally we need to have information that contains both aspects. For this, the system has a place called Instructor. Every time an order or command is issued that does not comply with what is systematized and indicated by the Founder of the discipline, its legacy is being misrepresented. Every time a mechanism established by him is modified, Its fate is being changed and rendered ineffective in our reflex actions for self defense. The plurality of versions of the same technique, as currently occurs, produces doubts, errors, and false beliefs about a mechanism that was designed for a unique utility. Books, encyclopedia, and films of the Founder of Taekwon-Do show that the current biomechanical diversity is nonsense. If such variety only affected choreography, it would not be correct but it would remain an anecdote in the identification of an institutional sales policy. The problem is that these differences in execution are not only choreographic but also affect the effectiveness of the mechanism, which was designed for self defense and not for corporate showmanship. In summary, our body is not autonomous, its mobility depends on the laws of physics, which in turn respond to the information received; therefore, making modifications or giving false information is misleading with serious consequences.