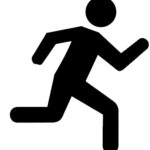 At the beginning of the development of the Art in the West, there were very few students in all the member countries. Taekwon-Do was struggling to survive in a martial arts world that resisted its inclusion. In those days (late 1960s), it was generally called Korean Karate. The influence of movies and television series pushed people to practice martial arts, turning the few students into a large group, and the name Taekwon-Do was definitively accepted. The evolution of students in their knowledge and ranks was not as fast as it is today. The commitment to discipline, philosophy, and efficiency was also different and essential because the sports aspect was not dominant. Everyone was dedicated to acquiring knowledge and skills to justify the rank obtained. The advanced color belts acted as assistants to aid the few existing Instructors. A black belt was a respected curiosity and their ranks were 1st. or 2nd Dan at the highest.

In those days, a Western Instructor with 4th Dan or higher was an illusion. All these advanced ranks were just a dream, as well as his supposed technical capabilities. The categories of Masters were practically impossible to reach. In those days the only Grand Master was General Choi Hong Hi, founder of the Art, and the rest of the international high ranks were 5th or 6th Dan. Time passes and the evolution of the discipline was exponential, technically and demographically. Black belts were no longer a curiosity and became a common level to achieve.

The same happened with the higher categories; International Instructor and Master became familiar voices for naming people who teach Taekwon-Do. However, the 8th and 9th grade were still considered the elite throughout the world and their holders were normally close to the Founder. These levels had the extraordinary condition of being pioneers in their own countries and with a particular knowledge that the other categories did not have. The demographic evolution brought a new understanding of promotions and their requirements. There are many more International Instructors, Masters, and Grand Masters than in those days, but the general consideration of these high ranks is not the same as it was years ago. In comparative terms over time, the following questions are pertinent: is today the understanding of the ranks obtained the same as in the early days? Are promoted people concerned with justifying the category acquired as in those times, or is it just a mad race to the top?

When the Institution that grants the ranks is only one, the Entity itself regulates the places to be occupied according to people’s capacities and not only by the category the person has. Today all these top categories (with or without personal capabilities) seek to lead their own Entities and occupy a place whose public recognition is getting smaller every day.

Demographically, Taekwon-Do has grown, but institutionally, it has been weakened by fragmentation. The army has many generals, but each only commands one company of that army. To control the entire Army, the approval of all the Generals will be necessary to support one of them. Today we are in the complete opposite of that truth. In this crazy race to the top, we are losing respect for many things: the time required between categories and the minimum age to be promoted, training, philosophy, theoretical knowledge, and the real capacity of these high ranks. Meeting the requirements set by a recognized Entity plus daily training allows for achievement of a proper rank. Daily work on the items listed above is the only feasible path. The time between categories is inevitable; however, time alone does not produce the quality necessary to occupy a place. Having up-to-date information and proper physical fitness is the right way to go. It is necessary to understand the meaning of the words. It is imperative to look in the dictionary for the explanation of the word active to recognize the passive attitude of some people. Many people want to live in their past following the old saying of achieve fame and go to sleep. The past without present is a sign of people in retirement.

To be aware read the previous notes