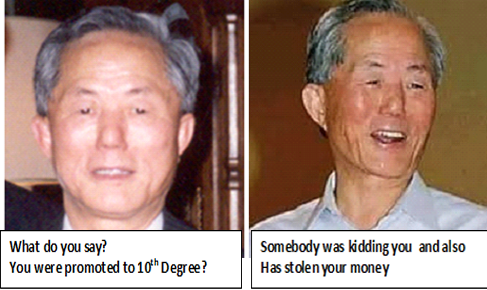 No doubt great advantages derive from martial arts. They differ in their origin, their philosophy and their biomechanics. From an anatomical, organic and psychic point of view, it is possible to find and incorporate many benefits with its practice. I will only refer to Taekwon-Do as a martial art with an undeniable demographic increase in the last thirty years. This evolution includes a diversity of unthinkable situations long ago. Its Founder emphasized to the satiety in every seminar, interview or report I had to translate that Taekwon-Do is a martial art and not a sport.

The Discipline has a sport facet that allows the general public to obtain information on the Art by the performance of competences in determined aspects of its composition. Its development is more complete and important as a whole than what is usually seen in the competition field.

In the sports ground everything is relative and ephemeral. The champion is only such in that tournament or championship; to be so again he must go through the same eliminatory process, just  as the other competitors and in most cases the result is not the same.

However, the widespread belief is that once he was declared champion, he is a champion forever, eternizing an ephemeral sporting achievement and often oversized by the occasional chosen one.

To understand the true but also the limited importance of this accomplishment, it is necessary to remember that martial arts are free of weight, sex and age because the defense of physical integrity only recognizes as a winner the one who saved the skin.

The Art in itself is a whole that includes in its composition a protocol, a philosophy, a physical management and a psychic condition that characterizes and distinguishes it. Its protocol imposes without distinction of sex or social condition a line of behavior and respect for the other, the necessary condition to impel the other to return such consideration to us. In the other is involved every human being with whom we have to relate. Respect to be respected is the order to follow. We include in that respect TO FOLLOW THE RULES imposed by the art and society in which we are integrated. Both tell us that every transgression degrades and soils the protocol that we accepted to respect and which honors us.

When we appeal to get promoted by the easy way or before the time set out in the protocol, we are transgressing it and we are self-deceiving. Philosophy has also been mocked. Physical performance cannot respond because we have not respected the times required for the maturation of knowledge and finally our psychic condition has been weakened by the guilty action we have had. An imposture… which only is a fraud disguised as a truth.

Is this what happens when someone usurps a degree that doesn’t belong to him/her yet?

Yes it does, but they don’t say anything because they don’t care, their goal has never been the Art but the economic bonanza that it can bring. Degrees are in that crazy economics career a necessary step to fatten pocket and ego, not knowledge. Absent is the protocol that the imposter does not follow but demands, the philosophy he enunciates but does not respect and the psychophysical domain that he does not have but brags about.

The Founder of the discipline established rules to follow and the right times of the categories that represent them. His physical absence has allowed the imposture to make his own. The highest degree of the art is no longer granted as he established, by a committee composed of nine members of the highest hierarchies of the Entity concerned, but is granted by a single person who works as a God and distributes cartons fitting only to his personal judgment and convenience.

It may be that the highest degree of the art no longer is the 9th. Dan but that there can also be awarded the 10th. Only that God who promotes from his infinite blessing and personal economic expediency knows how many other Dan above 10th will be recognized. But beware, this happens with the necessary complicity of those who receive it and adhere with their complacency to such mockery.

The highest graduation in Taekwon-Do has been, is and will be the 9th Dan. The reasons for this unavoidable rule to follow are well explained in the pages 91 and 92 of Volume 1 of the 15-volume Encyclopedia written by Gral. Choi Hong Hi.

When you mention his name and use his photo, you are required to use his rules, biomechanics and protocol. The imposter does the opposite; nothing and no one prevents it. If you wish to continue that kind of behavior, please do not use the name Taekwon-Do to do so but have the courage to invent your own, which enclose in it uses that kind of proceedings. There will be adepts; they are the same ones who have been willing to recognize as valid that god who deliver pasteboards.

To be aware don’t miss the previous notes