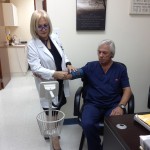 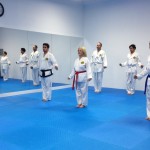 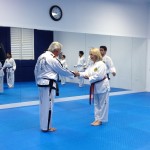 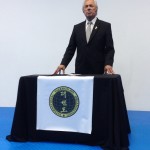 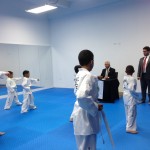 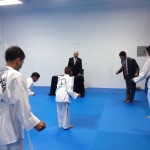 Taekwon-do’s founder, General Choi Hong Hi, emphasized in all his seminars the importance of the correct use of protocol and recognition of titles or grades granted in the Art. Many reasons support and justify such emphasis.

Everyone should be aware that this activity includes close contact, and it implies the necessity of controlling aggressiveness. Without the correct use of protocol, the possibility of training and evolution in the discipline would be nonexistent. The absence of respect for Taekwon-do’s protocol and the loss of self control in sparring would bring upon the practitioner the possibility of sustaining serious wounds which nobody in sane consciousness would accept. A correct teaching method would impose learning of the protocol before any form of biomechanical martial training. A teaching method headed in the opposite direction would go against both the good health of the practitioner and the Founder’s mandate. As some would say, it would be equivalent to giving a knife to a monkey, expecting the primate to have good judgment to use it properly.

The correct usage of Taekwon-do’s protocol includes showing respect for socially established values that are permanently promoted, such as respect for parents, elders, a country and it’s symbols, emblems of the Art and an overall respect for all human beings.

Without the right usage of protocol, respect for the items above mentioned could be easily lost, and all contests would be given a violent and life-threatening nature. Evolution and improvement in self-defense would be null. In other words, it would be impossible to prevent the monkey using the knife in a wrong and malicious way.

Chariot Kiunne… Chariot Kiunne… a phrase uttered countless times in all training sessions. Coupled with an explanation by the Instructor, it compels the student to recognize other people and the place that they occupy. It pushes us to understand that we are “other people” to the rest as well.

Without the right handling of aggressiveness, a healthy social relationship between practitioners that runs parallel to the development of martial skill would be impossible. Aggressiveness is inherent to human beings, and is present in all human activity. Learning to coexist by controlling this aggression is the only way to progress.

It is important to understand that knowledge of martial biomechanics must not be transferred to people who don’t demonstrate a permanent respect for the social values mentioned earlier. Doing the opposite would be promoting bullying.

The adequate use of protocol inside and outside the place of practice (dojang) is essential, especially in championships. Many times, medals and trophies are considered more important than the mentioned values because the lessons were not transferred to the students in the correct way.

The Art is taught to children and adults, and the correct teaching method inevitably produces better human beings.

Promoting the development of human intellect is a social priority.

In any field, titles are granted to denote proficiency and evolution in that specific area of knowledge. Academic titles obtained by practitioners indicate a special efficacy in a labor or, in some cases, their intellectual capacity, but not knowledge of Taekwon-do.

Knowledge of the Art, its protocols, its biomechanics and the experience acquired with time of the body working towards the mastery of self-defense, impose the use of grades or levels that every practitioner of the Art has to respect without exception.

As the Founder said, a superior intellectual capacity is a great help for a better understanding and a better usage of the Art. However, he insisted that practitioners, Instructors and Masters be named only by the grades obtained in the Art.

He explained that this is a way to avoid the wrong use of titles obtained in other activities that don’t necessarily denote a proficiency in Taekwon-do.

Practitioners with a college education owe respect and acknowledgement to those who probably have no academic grade, but have obtained a superior hierarchy in the Art due to their experience, discipline and physical ability. General Choi personally established in different seminars that only titles and grades granted in Taekwon-do would be utilized in meetings and places where the Art is being improved. This is why a particular salutation was developed and is only used in Taekwon-do.

Taekwon-do is a psychophysical activity. An adequate balance between the theoretical capacity and its correlative body handling must be present. The study of theory and the physical progress in the Art must be guaranteed for everyone equally.

The evolution demonstrated by the students will be equivalent to the grades granted to them, by which they will be recognized and named.

Grades granted to recognize the different abilities and knowledge in color levels (Gup) or in black belt hierarchies (Dan) were specifically established for the Art.

An academic title in other fields will not grant preponderance over other practitioners due to this condition. The addition of a title that does not belong to Taekwon-do to name or recognize practitioners, Instructors or Masters is not right, and must be not utilized.