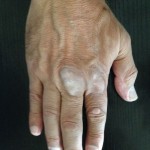 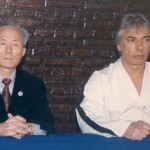 After translate the Taekwon-do’s Condensed Encyclopedia into Spanish and act as its Author’s translator and interpreter for many years, I can say that this detail established a differentiated connection with Gral. Choi Hong Hi that goes beyond the comments.

I was not interested in pictures taken besides him and commercially exploited as was done for many people. My interest was in learning from whom was my only Master in Taekwon-do, receiving details and information non registered in his literary work. His Encyclopedia is a technique and philosophical book. In it, were not included the countless anecdotes emerged from interviews, seminars, conversations about different items which improved and widen my knowledge, and of course the personal corrections received from him.

As a resume, an special opportunity to acquire a differentiate  learning (with the book alone is not enough as was explained by the General in his job).

I think that there’s no another way to learn than doing. The learning process is the base of the future proficiency.

In those times, the only mention of such stories would be the mortar for malicious attacks from other people who always thought their nearness with him as a possession.

However, Jealousy, notoriety and of course the potential economic earnings, brought attacks and refuses against me due to the mentioned nearness and never imagined by the good will.

The Taekwon-do’s Encyclopedia is the guide to follow which cannot be modified in none of its terms. Today this is more than a literary job or a technical book, it is a testimony.

History is past, present and future at the same time. To understand this concept makes the difference.

However, a new edition produced after his Author’s passed away, not only include wrong modifications never agreed by the highest categories, but a joke to the General Choi’s memory.

Believe me  that I’ve researched the Encyclopedia several times from its beginning till the end and vice versa only to build the index into Spanish, without mention to study the technical details to put into play with my body. Yes with the body. Because if you can’t do it, you don’t know it. That is the surprise of the Taekwon-do’s knowledge.

Thousands of people say that they know this or that technique or exercise, just because they read it or saw it performed by another person. Under this wrong criteria they intent to teach the art.

In Taekwon-do you know something when your body can perform it . After this, you are in conditions to teach that knowledge to another person.

The cycle of Taekwon-do or the Composition of Taekwon-do, is a chapter to take into consideration. There, is very clear explained that the study of the Art is not only patterns, sparring or the sport area. Other items must be fulfilled on training for a correct development.

Some tales about General Choi’s teaching could be pertinent to be mentioned due to the wrong interpretation frequently used about aging or training.

Age is commonly used to justify apathy. However and about it, Gral. Choi in self contradicted such attitude. At his 83 years of age he did pushups over the stage (Buenos Aires – Argentina on September 2001). He demonstrate the right basic job to develop the knuckles and a general strengthen of the hand, compulsory to all black belt to justify his rank.

At this stage and over the same scenery (about 1 m or 3ft high) he jumped to the floor to correct a student’s blocking tool repeatedly performed in a wrong way. What the young Masters present there did? rushed to avoid a possible injury of the General in his jumping, but…going down by the stairs, a shame of the age and the training if this is the case we are talking about. That story can be remembered by all the students present there and checked in a note published in a well known magazine about martial arts.

In another seminar held in Tegucigalpa – Honduras (Central America) on 1989 and giving an example about the compulsory physical job that an Instructor have to do to justify his rank, he stroke his hand many times against the wall. After this, he asked to several attendance black belts to show their hands. As a result: he could check that nobody had their hands trained. He finished his teaching  with a laconic «these are not Taekwon-do’s hands».

Taekwon-do is a psychophysical discipline. If you only want to speak or tell your personal experiences, write a book. If you want to teach, you have to move about it.

You will give only what you have.

Taekwon-do only is where the knowledge is. The permanent psychophysical improvement and its revalidation is the only way to follow.

Was always proposed as a matter of relevance that Taekwon-do developed and systematized by his Founder, General Choi Hong Hi, would never have any identification with a race or Country. So is written in his literary work (Taekwon-do’s Encyclopedia Vol. 1 page 11)and so was tireless explained by him in all verbal or written interviews.

About knowledge, it will be in hands of the people who really trained over the years. The oblique eyes don’t guaranty proficiency.  If this would be true, why to do any effort in learning if you’re occidental?

There are so many world, continental and national champions as organizations exist. Don’t go in depression and train, if you dare to make the effort, you may become in one of them.  I wish you all the best . Thank you for your time