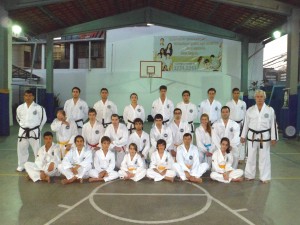 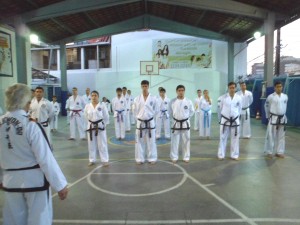 On September 20th/21st this year was held an International Seminar in Fortaleza City- Brazil.

This was dictated by  Senior Grand Master Ricardo Desimone (IX Dan), authorized to give this kind of Seminars in the entire world. The event was because the invitation of Brazil’s NGB International Instructor Teodosio Riveros  (V Dan). In the mentioned Seminar were also present students of Riveros and his Instructor Marcio Carvalho from Brazilia City.

The Event was developed with great acceptance by the students present and at the end they asked by a repetition in the near future. The course was about items very difficult to develop in normal training days as Taekwon-do Philosophy (Do), Biomechanics development, Patterns (Tul), Sparring and its sports rules applications and Self Defense (Ho Sinsul). At its end were held a meeting with black belts from Brazil where was emphasized the necessity in working all together and being autonomous in their decisions without acceptance the intromission of foreign people from other Countries which are not invited by the Brazilian people.